I have believed in God 1 for most of my life. Having been brought up in a major western religion, my initial beliefs were based more in dogma and fear than in anything else. I felt I had to believe in God… or else. 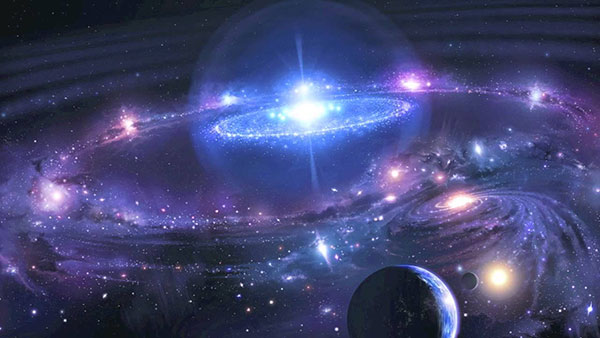 As a child, I had little interest in a religion that I perceived to be overly steeped in tortuously boring tradition (e.g., the services were still performed in a foreign language), or one where my relationship, indeed, my forgiveness was mediated by empty recitations of so many prayers. My childhood beliefs should not be considered, necessarily, critical of any particular religion because I really didn’t know any better. Though I lacked all but the simplest understanding of theology or religion in those days, I nevertheless believed in God, even if I didn’t have good reasons for doing so. 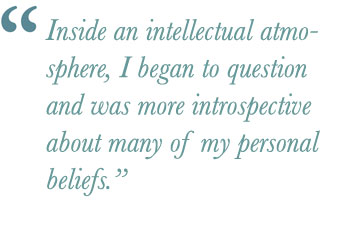 But something happened after I entered college. Inside an intellectual atmosphere, I began to question and was more introspective about many of my personal beliefs. As my knowledge and understanding increased, I found myself wanting to have sound reasons for the things I believed. I wanted to hold “rational” beliefs with respect to pretty much everything. So, I continued my quest for knowledge and, in fact, I became a professional student, a status I have maintained to this very day. Throughout my journey, I have attempted to educate myself on many topics. Besides my primary disciplines of Health Sciences and Education, I have studied world religions, philosophy of religion, theology, apologetics (reasoned arguments or writings in justification of some philosophical position), hermeneutics (the branch of knowledge that deals with interpretation, especially of literary texts), languages, history and communication, all of which have been helpful in forming my beliefs. Even with such background, I must admit at the outset that I am neither a philosopher nor theologian. My expertise lies in the disciplines of science (specifically health sciences) and education (specializing in educational technology). With that caveat, let me begin.

Many people like to argue about religion. I’m not one of them. It’s a fool’s errand to think you can convincingly discuss religion with most people, primarily because there is no such thing as a single “religion.” There are hundreds of religions, each with their distinct doctrines, dogma, and sacred texts. Any such discussion has to be laboriously broken down into the parts relevant to that single religion and I have found that most people won’t bother doing the homework necessary to have the appropriate depth of engagement. Personally, I have neither the time nor the inclination to study individual religions for the sole purpose of argument. In my experience, arguments about religion typically generate plenty of heat, but very little light. The vast majority of people I’ve met will neither be persuaded nor discouraged by the outcome of arguments about religion. That said, I am more than willing to discuss most any topic with most anyone who has the desire to engage respectfully and honestly and without a need for “winning or losing” as a final result. [I believe that no honest, rational person needs to fear the truth].

In any case, in this essay I am not attempting to defend any religion, per se, nor am I attempting to prove the existence of God. Instead, over the course of two essays, I will attempt to present a broad, synoptic case for why it is rational 2 to believe that a metaphysical entity 3 was responsible for the origin of the universe and why it makes more sense to believe this than to believe the universe sprang up from naturalistic causes (i.e., the basic view of materialism).

The process of rationally justifying any hypothesis, theory and/or belief, typically employs one or more of the following methods: reasoned discourse, logical proofs, historical evidences, language interpretation, empirical evidences, mathematical solutions, statistical significance, and many, many others. In general, any hypothesis or theory on ultimate origins must credibly address the origin of the universe in terms of norms of rationality 4 across many disciplines.

For a belief about the origin or cause of the universe to be considered ‘rational,’ its arguments should be consistent with applicable norms of rationality and with accepted laws or principles of science (i.e., gravity, thermodynamics, etc.), insofar as those laws and principles are properly circumscribed under the overarching umbrella of scientific methodology. If any arguments successfully meet these conditions, we should then accept the theory that best explains all phenomena or observable data relative to other hypotheses.5 In the end, there still may be arguments that count against an accepted hypothesis or theory so that it remains ultimately provisional, pending a better explanation of a given state of affairs. 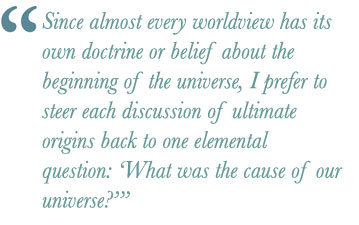 Since almost every worldview 6 has its own doctrine or belief about the beginning of the universe, I ask people to consider one elemental question: “What was the cause of our universe?” Too many people have never really thought about the answer to this question. And yet, as people attempt to cite reasons for their beliefs, their answers to this ultimate question will often bring to light the rationality (or lack thereof) of many of their arguments. For example, one cannot rationally believe in freedom of choice (i.e., free will) if one also claims to believe in the theory of determinism (i.e., that all events are ultimately determined by natural laws and causes). In other words, two basic beliefs that are contradictory cannot both be true.

As people consider the assumptions of their own worldviews, they can’t help but be confronted with the many difficult questions that variously pop up: Can something exist without a cause? What can cause a rational mind? Is there a distinction between the brain and the mind? Do humans possess free will, or are their actions determined? Do humans possess an authentic purpose, or are we purposeless and insignificant in the universe? These questions, and more, must all be confronted when one deeply considers the cause of the universe.

Matter as the Cause of the Universe

Current scientific consensus puts the age of the universe at about 13.8 billion years and there is evidence from different scientific disciplines that the universe was the result of a “Big Bang.”8 That is, at the beginning of the universe, there must have existed sufficient information and energy to make possible (1) the instantaneous formation and (2) rapid expansion of the cosmos into (3) a highly organized and complex system.

Subsequent to the Big Bang, the universe has been governed by a set of universal laws including the law of cause and effect.9 For each effect, there is a cause, which goes back until some such root cause, or the beginning of the universe, as the case may be. Any system of belief (i.e., worldview), theory, or hypothesis about ultimate origins should explain the appearance of universal laws, the appearance of the physical universe, the apparent existence of non-spatial and non-temporal realities (e.g., rational thought, numbers, soul, spirit), and the apparent existence of free will. 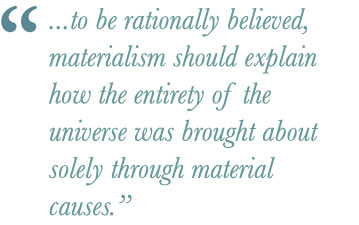 Most forms of atheism as well as agnosticism subscribe to a belief that materialism explains (or will explain) the cause of the universe. The point at issue is whether a purely materialistic cause, or a supernatural, metaphysical cause provides the best explanation of the entirety of the universe.

Below are reasons why I believe materialism is not a rational theory for the origin of the universe:

For those who believe in materialism, there are two basic choices that can be made regarding the existence of the universe: either the universe has, in some form, always existed (an infinite causal regress), or at some point it sprang into existence (a causeless effect). Though there are other hypotheses, none have achieved a status other than problematic and conjectural. Below are some of the problems that cannot be rationally answered by materialism: 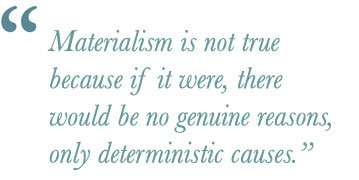 Not only does materialism not successfully address the problems listed above, it can only avoid its own unsubstantiated assumptions through attempts by its own “true believers” to focus on irrelevant data and through special pleading.10 Thus, pending further explication, or a good defense, materialism does not present a rational theory for the existence of the universe.

Limitations of Science in Discussions Regarding the Origin of Universe [see a full explanation of this view in the article: Seeking Truth: The Limits of Science and the Role of Philosophy and Theology.]

Naturalistic sciences, which are largely based in methodological naturalism,11 have helped us to understand much about the universe. However, materialism and ontological naturalism12 are philosophical positions (not merely methods) that postulate that all phenomena can only be explained as the product of natural laws and causes.

It is important to realize that there is a built-in bias against the supernatural and metaphysical within scientific methodology that favors non-supernatural explanations. Indeed, science doesn’t even consider supernatural causes, but instead, assumes there are none. However, while it is certainly appropriate to circumscribe scientific study to the realm of natural laws and causes, the decision to adhere to a naturalistic methodology (for scientific research) does not entail that the world is solely naturalistic. 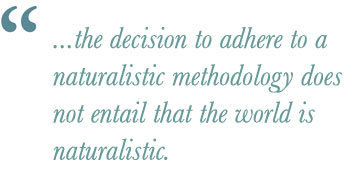 Empirical science, properly delineated, makes (should make) no comment on metaphysical realities. At best, science can only present its observations regarding the physical world. Failure to observe this maxim leads many to a position known as scientism. Scientism is an excessive belief in the power of scientific knowledge to explain everything. Scientism places an arbitrary restriction on knowing anything outside of what is attainable through scientific methodology. Unfortunately, by following a naturalistic methodology, sciences can neither affirm nor deny a metaphysical cause of the universe because by their very nature the sciences are limited to propositions about the physical world.

Materialistic atheism must assert that the universe (1) is eternal, for which there is no evidence, or that it (2) ultimately sprang forth from nothing (i.e., an effect without a cause), which is patently absurd. It must claim that (3) mind, intellect, psyche, soul, and/or spirit are indistinguishable from matter, which means that everything in the universe, including thoughts, concepts, ideas, and other obviously non-physical entities are caused by some physical process. (4) Materialism is a self-defeating dogma, for by its entailment of thoroughgoing determinism, it cannot be known to be true. If all causes are predetermined, they are insusceptible of rational deliberation that would lead to truth. In fact, determinism nullifies itself by precluding both rational justification and knowledge, making it impossible to explain ultimate origins.

In Part 2 of this essay, I will discuss my reasons for a belief in a metaphysical cause of origin of the universe.