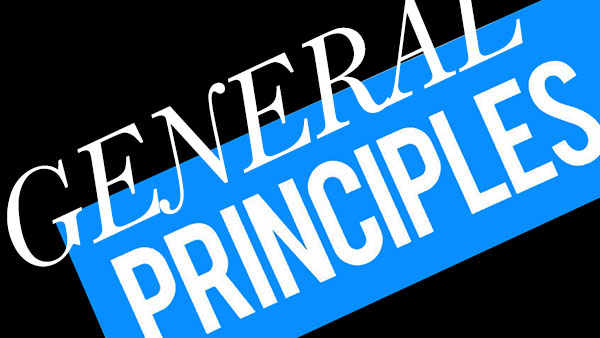 It seems like older generations think the generations that come after them are in some ways dysfunctional; that even in the midst of resplendent modernity, the current cohort of youth are increasingly lost (if not mentally challenged). I get that. Perhaps it’s nostalgia; wishing that things were as simple as they used to be. Or jealousy, that maybe the current generation has things better than their own. Or maybe they are just right; the current generation simply has some screws loose. Whatever the case, no matter what generation one belongs to, there is a longstanding relationship between parents and their children that carries a solemn responsibility. Parents have but so many years to instill in their children the kind of qualities that will endure and will ensure their success in life.

But what kind of successes are parents really responsible for? Is it financial success? Does it mean ensuring their kids will have a big house, “a chicken in every pot and a car in every garage”?1 Although I don’t think it is a bad idea for parents to hope for a better situation for their kids, I don’t think that is their primary responsibility. I believe that every human parent has a higher calling. It is a mission that will have the highest possible impact on the future of their own family, as well as the human race. This is a calling that doesn’t cost anything, nor does it require a fancy education, but it does require a certain strength of will that is based on values. Parents must pass on general principles to the next generation. 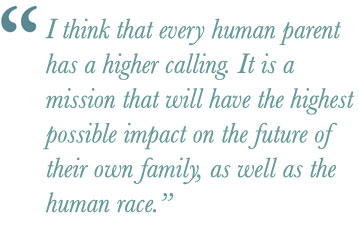 When I was young, my parents told me what to do and when to do it. Essentially, any spoken imperative from my mom or dad (either with or without a “please” appended to it) was tantamount to saying, “It’s my way, or the highway.” I remember only a minimal amount of grumbling on my part. (Granted, if my parents were still alive they might have a different recollection of it.) I just did what I was told. As I grew older and gave it more thought, it became clear that whatever my parents asked of me must have been in good faith and for good reasons. I trusted that my parents had my best interests in mind and therefore—whenever I was asked to do something—my response (like any other Nike fan) was, “just do it.” And, if mowing the lawn, cleaning the toilet bowl, and saying “please” or “thank you” when navigating life were odd requests from parents then I was not aware of it. In other words, I assumed there were good reasons to obey my parents and to take their advice to heart.

I was never asked to serve as a getaway driver for a bank robbery, or to “key” the paint finish on someone’s car, or to steal a mate’s lunch money; these would have, indeed, been evil requests. But what I’m suggesting is that it doesn’t take a rocket scientist to figure out that there are certain “general principles” that everyone should understand without much fanfare. Politeness, respect, kindness, compassion, and generosity are not too much for parents to demand of their kids. A hard day’s work, with 100% effort, and without expectations of something in return (unless it’s your paycheck), cleaning up after themselves, and helping others in need should be unspoken standards of excellence that are expected of children by their parents. And, for all the pacifist parents out there, I should also add that, in my opinion, any disapproval of appropriate punishment for bad behavior represents nothing more than the withering will of parents who have likely pampered and kowtowed to their kids.2

These days it seems that parents spend way too much time explaining why they want their children to act this way or that. I don’t get that. In my opinion, it’s a parent’s job to tell their kids what to do. And, unless their kids missed those days in school when the teacher talked about common sense, they will not be hindered from discerning whether their parent’s actions are a matter of good sense. As kids get a bit older, parents can take the time to explain the rationale behind some of their actions, but that shouldn’t absolve kids of the obedience and respect due their parents. Kids will grow up and they will either come to agree with their parent’s values or not. And at that point, it will be on them. 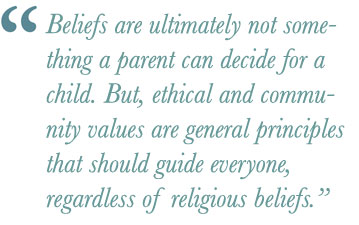 By the way, beliefs are the basis of one’s values and those values lead to actions. My parents taught me their values but they never told me what to believe. This included religious beliefs. When I was young, they told me to go to church. So, I went. The church has a certain amount of indoctrination of beliefs, but it also has some values to instill. My parents were concerned with my values because ethical values often lead to ethical actions. But they never expected me to have this or that religious belief. Beliefs are ultimately not something a parent can decide for a child. But, ethical and community values are general principles that should guide everyone, regardless of religious beliefs.

Too many parents think their main job is to be buddies, pals, compadres, or close confidantes of their kids. I don’t discourage that sentiment as long as it doesn’t get in the way of the parent being a parent. Parents should make sure their kids understand that there are right and wrong ways of conducting themselves, and that they need to be clear about the differences and in all ways imitate the former. This is their responsibility to their kids who will one day need to impress upon their own children the same concepts. And if the parents have not been clear on these general principles, then that is on them.

When children are old enough to leave their parents and move on to college, or to a job, or to a wife or husband, the parents will have minimal opportunity to affect appropriate behavior from then on. At a certain age, children may no longer seek the advice of their parents. That would be a shame! No matter their age, children should seek out and listen to the advice of their parents, who have chalked up years of life experience and may just have something helpful to contribute. After all, advice is free, and better yet, an adult child doesn’t have to take the advice proffered. It’s a win-win situation! Therefore, before it’s too late, a parent’s responsibility is to prepare their children with a working knowledge of the general principles that will help them become good husbands, wives, classmates, workmates, teammates, friends, family, and citizens.

In this brief article, I have purposely not spent much time on providing examples of general principles. Instead, I have just introduced the topic. I hope others will pick up the baton and run with it. What are your examples of general principles that kids should be taught and seem self-evident? Write them up and post them in the comments section. Or, if you have a whole list, then please, write up an article and submit it to be posted on the Things I Believe Project website.